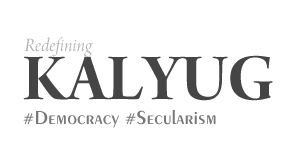 Well, what are our choices?
Somebody whose only credential is his surname? Or, somebody who believes that anyone who opposes him is against the nation? They both, by their very core virtues are against the fundamentals of democracy. India has never been politically so bankrupt in recent decades as it is now! But is the reason really them? Or is it we, the people? The people who allow them to polarize us? Let’s not let democracy lose!